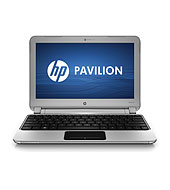 I upgraded the computer to 8G of RAM and a Seagate 1TB hybrid drive that I had left over from another project.

I recently upgraded the DM1 to Windows 10. All the devices worked as expected post upgrade. My only complaint was with the background updating. Whenever it was running the CPU and disk usage would spike. This was with the factory HD. I was surprised by how much disk activity there was. With the HD being a 7200rpm drive it should have been fast enough. So, other than being a bit slower than I care for it was an okay experience.

I reset the Windows 10 installation to "new". I then removed that hard disk and replaced it with a Seagate 1TB hybrid drive.

Working on a Windows machine, I downloaded the ISO image from the Linux Mint website Then I picked up a copy of rufus for "burning" the ISO to a USB thumb drive. Next, I had to drop into the CMOS settings and reconfigure the boot order allowing for boot from USB.

Post installation, all of the laptop devices seemed to work properly except for Bluetooth. Research points to this potentially being a problem with this particular release of Mint.

I used a Logitech Anywhere MX mouse with this computer. I had previously paired the mouse and dongle under Windows. I did some research and found that there is software for working with the unifying dongles.


Software Installed on top of the base install

It did seem like the computer took a long time to boot with Mint. However, I've observed the same behavior on other more powerful computers running Linux.

PDF viewing was slow when I was viewing some rather large PDFs of graphic novels. Rendering and scrolling was painfully slow. However, when viewing more "normal" type PDFs like a one page hand out or a 100+ page text the performance was acceptable.

Web browsing and rendering of more complicated sites was slow.

Atom performed acceptably with Python as well as Markdown with preview.

Overall, I found the Linux experience enticing. I feel that I would rather use the laptop with Linux than Windows 10. This configuration is a pretty good balance of a don't worry about it on the go laptop. However, this form factor and sub-optimal performance does leave me longing for a laptop like what I envision the second generation retina MacBook will be like. Although, that will cost significantly more!

Well, while Linux was enticing the overall experience/performance wasn't good enough to keep me hooked.  So, I thought I would continue the experiment and finish off with an apples to apples comparison with Windows.  I did a fresh load of Windows 10 on the Seagate hybrid drive.  This configuration performs much better than the earlier configuration.  I tested the Windows installation with Firefox, Atom.io, node.js, Python, git and mongoDB.  The machine is still not a power house.  However, it is acceptable performance.   Also, the boot time is much faster than it was for Linux.  At least for now, I will be keeping the machine configured with Windows 10.
Posted by Bryan at 10/28/2015 12:29:00 AM No comments: