I have a SONY Flip 15 convertible tablet (SVF15N17CXB) that I use primarily for contract work that requires a PC.  It is a very nice machine with an i7, 8G of RAM and switching discrete/integrated graphics adapter.  When I purchased it in early 2014 the two things it was lacking were an SSD and an active stylus.  I quickly remedied the lack of stylus.  It did come with a 1 TB hybrid fusion drive which I reasoned I would evaluate while SSDs continue to evolve.  I used this configuration for the better part of a year.  I noticed that most often observed slowness came back to I/O bound processes – the hard drive light was flickering a lot and the performance tab in task manager confirmed it.  So, with the last minute renewal of tax credits on business asset purchases I decided to upgrade the machine.

I had originally picked out a Samsung 840 EVO at 512G.  Since then the 850 line up was introduced.  Based on my observed hard drive usage I decided to go with the faster, but slimmer (in capacity) 850 PRO in 256G.

I figured if I am going to go through the work of opening the machine up, I would upgrade the RAM at the same time.  I went with 16GB of Crucial Ballistix that is also faster than the stock RAM.  Since, the hard drive I’m pulling out is a 1TB drive I picked up a USB 3.0 enclosure with UASP support so I can use it as an external drive.

Upgrading the Flip 15 is not for the faint of heart.  It is ultrabookish in form factor.  What that means is no easy access panels.  You get lots of screws with some of them hidden under rubber feet and a cover you have to pry off.  I found the tear down in this video very useful.  My tip is to start prying the cover off by the power connector.  Continue loosening the cover all the way around.  Slide the cover off by moving it away from the head phones connector. 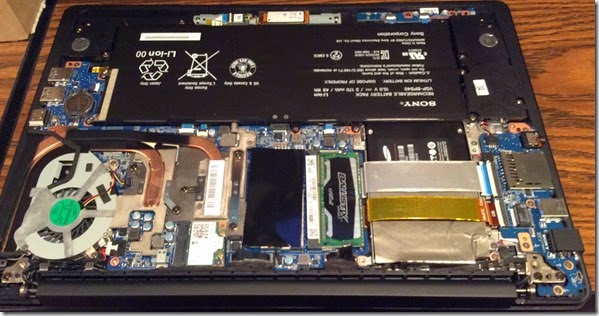 In the picture above you can see the new memory in place in the lower middle of the picture.  The SSD is under the silver and gold colored ribbons in the lower right of the picture.  I did not utilize some of the existing foil/plastic shielding that was on the original case.  It appeared that it was primarily there as an insulator between exposed components on the HDD circuit board and the rest of the machine.  The SSD has no exposed parts.  It an all plastic case.  I did reuse the adhesive wrapper/shield on the bottom portion of the drive as it is also used to secure the drive cable connector.

Since installation of the new parts, the machines performance is much snappier.  Windows 8.1 Pro launches in ~4 seconds from a cold boot.  Development environments start up much faster.  Overall, much less time is spent waiting on the machine.

Let me start at the beginning.  I usually like to start in the middle or at the end, much to the chagrin of friends and family.

We have tried to replicate the notebook digitally—mostly successfully.  Let’s consider a few aspects of the digital notebook experience:

The digital notebook experience has come a long way.  With the wide spread adoption of tablet computing I really hope we continue to see advancement in the active digitizer field.  I would hate to see the technology lose to the far inferior capacitive touch only stylus.